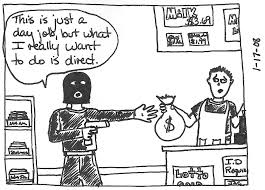 For born-agains, the goal is to leave the world’s ways behind but still live in the world. This can only be done with God’s help, and God isn’t going to help you until you’re ready.

But when God tells you it’s time, it’s time. You’ll know it, because God always makes himself as plain as day. He doesn’t give you hazy ‘signs’ or indirect signals; he tells you outright, like Jesus told Matthew.

This is Jesus we’re talking about – Jesus, who had the fullness of God’s spirit in him and never sinned. Even Jesus knew to keep his mouth shut until God had clearly called him. When he was 12, he so badly wanted to do his “father’s business” that he ran away from home and hung out at the synagogue in Jerusalem, preaching to the Jewish elders. But it wasn’t his time, so his parents came and took him home again. He remained in Nazareth, lips firmly sealed, until he was in his 30s.

God’s timing is perfect. When he tells you you’re ready, you’re ready. Don’t jump the gun, or you’ll do more harm than good.

Until that time, keep doing your day job, but do it as if unto God. That means, do your job as if you’re working for God, as if your day job is actually kingdom work. Do it to the best of your ability and treat everyone – EVERYONE – equally, kindly, honestly, and with respect.

Then you’ll be ready to do some real work for the kingdom.

Until then, keep your head down, your mouth shut, and your spiritual eyes and ears wide open, patiently learning from God’s spirit, like Jesus did.

By abornagainbeliever in Uncategorized on July 7, 2015.
← DISCRIMINATION DEATH →