Tag Archives: end of the world 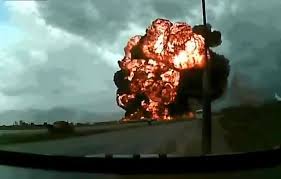 There was a news story the other day about a TV reporter who dropped dead from a brain aneurysm a few minutes after giving a news report. Yesterday, we heard about yet another plane that dropped from the sky in mysterious circumstances, leaving no survivors. We hear about these deaths, maybe say a prayer for those who are mourning their dead, and then we move on with our lives. We didn’t know the reporter. We didn’t know anyone on that flight. These are other people’s problems.

Jesus says no-one knows the time of the end, not even the angels in heaven. He gives us a general run-down of ‘signs’ we should watch for, but they’re so vague they could apply to any age in history. At the same time, he tells us always to be ready not only for the world’s end, but for our own: Both of these, guaranteed, will come without warning.

I don’t know about you, but this stuff makes me stop dead in my tracks and panic a bit. I think: What if my end came now? Would I be ready? Was the reporter ready? Were all the people on that plane ready?

The sleep described here is a spiritual sleep, not a physical one, and the thief a spiritual thief, not a common one. When we let ourselves be lulled by the world into thinking we have all the time in the world to get things right, we’re spiritually dozing and setting ourselves up to be robbed of everything God’s planned for us. We’re in danger of losing heaven.

When the urgency of “doing the Father’s work” is replaced with “eating and drinking with the drunken” and “beating fellow-servants”, we’re in trouble. Jesus spells out precisely what will happen to us if we lose that sense of urgency, and he does so using terms that leave no room for misinterpretation.

God loves us, but he also means business. Every day, all around us, we see and hear about people who experience their own personalized version of the end of the world. Some of these people we even knew well enough to be emotionally affected by their death. When their end came, were they ready?

Knowing this, we have no excuse if we’re not ready. We can’t claim ignorance.

We all need to seriously think about the reporter with the brain aneurysm and the people on that plane. Their stories are graphic reminders of Jesus’ warning always to be ready because we don’t know – we won’t know – the time of our end. If you were that reporter, if you were on that plane, would you have been ready a few days ago?

Are you ready now?

But, thank God, Jesus not only told us that we should be ready, he showed us how. We need to be sober. We need to watch. We need to have lots of oil in our lamps. We need to be ready to leave at a moment’s notice. And, most importantly, we need to treat other people as kindly and mercifully and respectfully as we ourselves want to be treated, and to make the best use of everything God’s given us.

If this doesn’t describe you and your life, you’re not ready.

Today may be your last day to get it right.