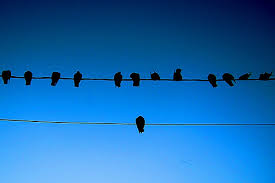 Being born-again can be a lonely road. Spiritually we’ve got lots of company (God and Jesus are always with us through God’s spirit, just as Jesus promised), but fellow human believers are few and far between. It can be discouraging at times to feel so alienated from the general population.

How do you resolve this dilemma? Or can it be resolved?

The good news is yes, it can be resolved, and the best way to start is to be who you are. In other words – just be yourself. If you’re born-again, be born-again. Let people know you’re born-again. They should know anyway, but if they don’t, don’t try to “hide” it to keep the conversation polite. You know what I’m talking about. Jesus said that our worst enemies will be those under our own roofs, and he wasn’t kidding about that.

He might also have mentioned that one of those enemies under our own roofs is – surprise, surprise – us. We can definitely be our own worst enemy if we choose to hide our true spiritual identity. It comes back to bite us hard, and may even cost us our grace. DON’T BE YOUR OWN WORST ENEMY. Don’t lose your grace. Stand tall in God.

The next step, after we out ourselves, is to be clear about what we believe. Millions of people call themselves “Christians”, but what they actually believe has nothing to do with what Jesus taught us. As born-agains, we must necessarily believe what Jesus taught. Believing it implies living it as well as preaching it. Jesus is our example, and our task is to mirror his example in our lives. So – don’t drink yourself into the gutter. Don’t watch porn on the internet. Don’t have pre-marital sex, and don’t marry someone who is divorced (if the divorced spouse is still alive). Jesus wasn’t preaching just to hear himself speak. He was showing us which choices to make that would lead to the best outcome for all concerned. That’s what God’s laws are all about.

Along with living your rebirth openly and being clear about what you believe, you should also not shy away from correcting false teachings. Jesus didn’t preach to non-believers, and nor did he yell at them for being non-believers. He just let them be.

In contrast, he spent a good deal of time yelling at people who said they were believers but showed by their words and actions that they were not. These were the hypocrites, and he didn’t hold back in telling them what he thought of them, or what was waiting for them if they continued in their hypocrisy.

Keep in mind that Jesus made a clear distinction between those who purposely skewed scripture and misled people (either from pride or a hidden agenda) and those who just got it wrong and/or messed up. He didn’t yell at the woman who was caught in adultery; he gave her a second chance. We all make mistakes and have moments of weakness, and sometimes those can be real doozies. Mistakes don’t condemn us; consciously and consistently choosing what we know is wrong – THAT condemns us. We all know the difference between those who sincerely love God but occasionally mess up, and those who are just pretending to love God in order to get a paycheck or fit in with the Sunday morning crowd. If we don’t know the difference, we need to learn it real fast because that latter group – the professional preachers and Sunday-morning Christians – is the main reason driving many would-be believers away from finding God.

Living fully as a born-again follower of Jesus means to be fully open about who you are and what you believe. That doesn’t mean you should preach to everyone, but anyone who knows you should also know that you’re a born-again follower of Jesus.  Jesus only preached to those who wanted to hear, but everyone who knew him or knew about him during his ministry years knew that he was a strong believer. You shouldn’t be mistaken for a Muslim or a Buddhist or an atheist. If people don’t like what you have to say or don’t want to be around you because you’re a believer, let them be. Pray for them. But let them be.

Which brings us back to the original dilemma and its resolution – how do born-agains find fellow born-agains when they are so few and far between?

The answer is: God will bring them to you. When you live your beliefs openly and fully, God will bring like-minded believers into your life (as well as believers who need to learn a few things from you, and believers who have something to teach you or remind you about). Jesus said: “Seek ye first the kingdom of God and his righteousness, and all these things will be added to you.” He was including human companionship in “all these things”. We don’t need to go out and look for fellow believers; if we’re living our lives as we should be living them, we’ll just happen upon each other.

God will make it happen.

By abornagainbeliever in Uncategorized on November 19, 2015.
← HEAVEN SIXTEEN HEAVEN OR HELL →