A True Fast: Giving Up Lent 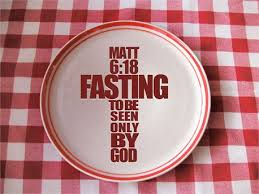 For practicing Catholics, Lent is the time of year when, for 40 days and 40 nights prior to Easter Sunday, you “give up” or stop doing something you enjoy doing, such as watching TV or eating sweets. In many instances, the activity you give up for Lent is a ‘bad habit’ that you want to quit anyway, like smoking cigarettes or overeating.

Why, then, do you only temporarily ‘give up’ something that you shouldn’t be doing in the first place? What is the benefit of giving it up for only five and a half weeks?

When questioned about Lent, Catholics explain that they ‘give up’ things for a certain time every year because it is traditional to do so. They also cite the importance of self-restraint and self-sacrifice in developing good character. For Catholics, Lent is essentially just a symbolic gesture of self-restraint and sacrifice as well as a sign of obedience to the pope.

But what does God think of Lent?

Not surprisingly, he’s not a fan. In Hosea, he states “I desire mercy, not sacrifice.” Jesus reiterates this position in Matthew, and Isaiah (58) explains in stark detail precisely what God means by fasting, including the consequences of ‘false’ and genuine fasting.

Jesus also advised us NOT to look like we’re fasting when we fast, stating that our fasting should be between us and God, and should not be announced or even visible to the world. This is similar to his advice to pray in private and to give alms (charity) anonymously by not letting your left hand know what your right hand is doing.

Lent is basically just a public display of piety. On Ash Wednesday, which is the beginning of the 40-day “Lenten season”, observant Catholics receive a cross-mark of ashes on their foreheads from the priest. This is supposed to represent, again symbolically, their repentance of, say, eating too many Snickers bars. The ashen cross also serves as a public declaration that for at least the next 40 days and nights, they’ll do their level best to abstain from eating Snickers bars (or smoking cigarettes or whatever). That the highly visible black smudge on the forehead goes against Jesus’ clear advice not to show the world that you’re fasting, should not be a surprise to anyone.

I have a real problem with Lent, just like I have a real problem with most things Catholic. My understanding is that Lent was initially supposed to represent the 40 days and 40 nights Jesus spent fasting in the desert prior to starting his Earthly ministry. During this time, he was tempted by the devil and overcame each temptation by a rebuttal based on the true interpretation of scripture.

The Catholic organization should take a page from Jesus’ book. He wasn’t out there in the desert to kick a bad habit or give something up for the sake of giving it up – he was being tested to show that even under circumstances of extreme physical and psychological duress, he was able to do God’s will, combat the devil’s insidious attacks, and withstand temptations with God’s help. He was using fasting as a form of training and preparation for the spiritual and physical rigors of his ministry work, which he could successfully accomplish only with God’s help.

Yes, I bolded those three little words so you can see what’s important here. Yet again, Jesus was showing us that we can do the seeming impossible (i.e., withstand and outsmart the very Devil, even though we’re nearing the end of our physical and mental reserves) with God’s help.

Jesus’ time in the desert wasn’t about self-sacrifice or any other kind of sacrifice. It was about leaning on God for all our needs, both physical and spiritual. In contrast, Lent focuses on self-sacrifice and leaning on one’s personal resolve to ‘give up’ something. This, I suppose, is meant to impress God in some way or win you spiritual brownie points, but I’m not buying it and scripture doesn’t support it. And it has nothing to do with Jesus’ time in the desert.

Fasts occur throughout the Old Testament. Typically, a fast is called in order to defer God’s wrath, such as when all the residents of Nineveh (including the cattle) successfully fasted to prevent the destruction of their city that was scheduled to occur within 40 days (see Jonah). Judaism also features specific fasting days, but they are at most a 24-hour period. A fast where you just randomly ‘give up’ something for 40 days and 40 nights has no basis in scripture at all, and is yet another example of what Jesus called “doctrines of man” masquerading as religion (which itself is a cheap knock-off of faith). Catholicism is mostly doctrines of man propped up on a base of demon worship, and Lent is its big red flag.

So what about fasting?

In this, as in everything else, we are to follow Jesus’ example and do God’s will. When God wants you to fast, he’ll not only let you know, he’ll give you the strength to do it. And it will be for a genuine purpose (like Jesus in the desert), not for some contrived hogwash like Lent.

By abornagainbeliever in Uncategorized on January 22, 2015.
← Onward, Truth Soldiers! STOP TALKING ABOUT IT! Choosing to Forgive Means Not Talking About it Anymore →