THE SECOND COMING: A reminder 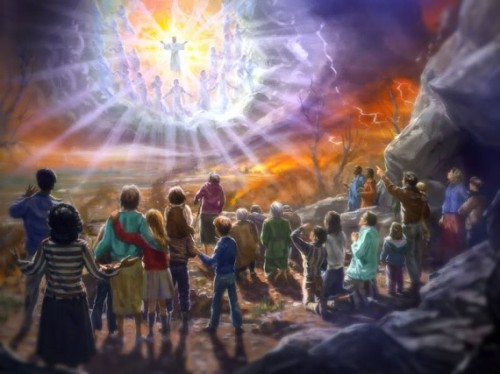 There is a rising fervor among self-proclaimed Christians for the second coming of Jesus.

Many either see themselves as escaping with Jesus through the (false man-made doctrine of) pre-tribulation rapture, or eagerly awaiting his 1000-year reign on Earth when he’ll set up his kingdom and set things right.

But here’s the thing – Muslims also expect a second coming of Jesus. In their version of end-time events, Jesus is supposed to co-reign with a great leader who will likewise set up a kingdom and set things right, but in an Islamist kind of way. To Muslims, Jesus is a prophet, not the Messiah, and he will return as a prophet, not as the Messiah.

And here’s another thing – the recently deceased Israeli Chief Kabbalist, Kaduri, proclaimed in a hand-written post-mortem missive that Jesus was the Messiah, that he had met him in dreams, and that he was already in Israel (but didn’t yet know that he was the Messiah).

The book of Revelation tells of a False Prophet that will more or less reign alongside another leader, while Jesus warns us in the gospels that he will not come back covertly (in the desert or in “secret chambers”) but as overtly and unmistakeably as lightning flashing from horizon to horizon. In other words, when he returns, there will be no doubt in anyone’s mind (let alone his own) that he is the one and only Jesus – the Messiah.

Organized religion, through the proliferation of false doctrine, is setting people up to fall for a False Prophet that will masquerade as Jesus. But Jesus warned you and now I’m reminding you – there is only one Jesus, and he’s not the Muslim one and he’s not the Kabbalist one. He’s also not the one who’ll be setting up a kingdom on Earth (remember how Jesus said that his kingdom is not of this world?) or performing miracles to adoring crowds or “rapturing” people before the tribulation. When Jesus comes, you will not hear about him through rumor or google search, but will supernaturally perceive him at exactly the same instant as everyone else on Earth.

It will be a supernatural second coming, not a military, political or religious one. And Jesus will not be incarnating in an Earth-bound body, but will instead be stopping by in his heavenly body just long enough to gather together the few believers still left on Earth and then make a quick and final exit.

You know the drill – don’t fall for the lies, and don’t bother arguing with anyone about them other than to point to God, Jesus and scripture, and pray for the deceived that they open themselves to the truth before it’s too late.