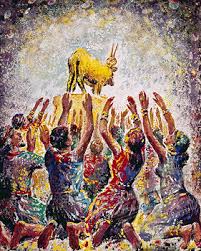 The dividing of Christians into denominations is not God’s work; it is the work of the devil.

Those who adhere to one denomination or another rather than cleave to God in Jesus’ name are doing the devil’s work, not God’s.

If you are a born-again Christian, you are to stand on God as your rock and follow Jesus as your Lord and high priest, master, teacher, brother, and best friend.

Following the tenets of this denomination or that, adhering to creeds rather than to God’s Word is like swearing an oath, which Jesus tells us not to do. Denominational creeds come from the devil.

Jesus did not invite anyone affiliated with organized religion to be one of the twelve. In fact, none of the twelve were involved in any form of religion prior to becoming disciples and none were family or friends of Jesus.

Think about that for a second.

Jesus’ worst enemies were adherents of organized religion, and it was these adherents who put him to death, not the pagan Roman ruler.

Think about that for a second.

Jesus’ ministry was anathema to organized religion, and NOTHING HAS CHANGED in that regard.

The only difference is that now the devil-worshipers call themselves Christians, but they are just as much haters of the truth as those who plotted in secret against Jesus and ultimately had him crucified.

If you love God and follow Jesus, you need to get out of organized religion.

If you crave being around others who likewise love God and follow Jesus, form your own house church, but steer clear of organized religion. Anyone who tells you “this is what we believe” and doesn’t point to the Bible is in a cult. The denominations are all demon-worshiping cults. Not one of them comes from God.

Organized religion will lead you astray. It will tell you lies and guilt you into parting with your hard-earned money, which it will then invest in real estate while it tells you it went to feeding or clothing the poor.

Judas Iscariot is the unofficial patron saint of organized religion.

Jesus told us that God wants people to worship him in spirit and in truth. That means God’s spirit, not demonic spirits, and yet demonic spirits have taken over most worship services, where people are goaded into being “slain by the spirit” or “speaking in tongues” (gibberish), and experiencing group hallucinations is the hallmark of a good time being had by all.

People go to services expecting to be entertained, and by golly, the devil is only too happy to comply. He always has his demons on stand-by for Sunday morning services.

Jesus tells us to pray privately, not publicly, yet people today make a great show of prayer, like the guy in the temple who Jesus said was not justified.

Paul tells us to test the spirits, but any form of supernatural display Christians now automatically attribute to God.

Christians are becoming very gullible and dangerous people; they are like the Hebrews who made and worshiped the golden calf while Moses was up on the mountain receiving the Ten Commandments from God.

I heard from the mouth of a Pentecostal pastor that being born again means nothing more than coming to knowledge of God. And yet I say to that pastor that Satan and all his demons have supreme knowledge of God and know the Bible backwards and forwards in every language known to man, but they are not born again and never will be.

Christians have unwittingly become the very thing that Jesus and Paul warned about, and yet they cannot see that in themselves because they are blind and deaf.

Pray for them but steer clear of them.

By abornagainbeliever in Born-again Christian, Christian, Former atheist on August 19, 2019.
← FORSAKING ALL SPEAKING WITH NEW TONGUES DOES NOT MEAN UTTERING GIBBERISH →