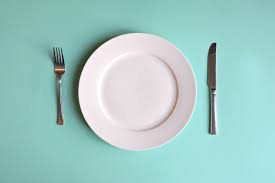 You know the one I mean – the one that most Christians don’t want to hear and would rather you not mention. In fact, that four-letter f-word is all but censored in most churches these days so as not to offend anyone’s delicate sensibilities. Jesus, on the other hand, was a huge fan of the f-word, doing it whenever he found time and reminding his followers that they’d be doing it someday, too.

That four-letter f-word is, of course, “fast”. Fasting has been all but banned from sermons these days, as anything uncomfortable or that requires us to “mortify the flesh” is not welcome by most of the paying customers in the pews. In post-modern mainstream Christianity, it’s all about good feelz and loving everyone (except your three ex-husbands [and their new younger wives]), and giving to the church expecting to get more in return. Denying your body food and drink when it’s hungry and thirsty is notably absent from the program of the prosperity megachurches.

But it’s not absent from this blog because fasting is important. We know it must be important because fasting was the first thing Jesus did after he was baptized in the River Jordan – he went out into the wilderness and fasted for forty days and forty nights. I could be wrong, but I don’t think that any of you reading this have fasted forty days and forty nights (I certainly haven’t), and I’m not sure that God wants us to do that, but we should still be willing and able to do it, if God calls us to do it. Recall that Jesus was “led by the Spirit into the wilderness”. It wasn’t his idea to fast for forty days and forty nights in the middle of nowhere; it was God’s. Jesus always did God’s will, not matter how unpleasant or seemingly impossible, and so should we.

Now if you’re not experienced at fasting, it’s not likely that God will lead you into the woods tomorrow and ask you to stay there for 40 days without food and water. But in case he does do that sometime in the future, you might want to practice up so you’ll be ready. Start with one- or two-meal fasts once a week and gradually increase to one-day weekly fasts. Then, every so often, increase the one-day fasts to two-day fasts, and then on to three-day fasts. Within a year, you should easily be able to fast three days or more without preparing for it in advance. You never know when you’ll need that ability, and it’s a good skill to have as a Christian.

Why fast? As I mentioned, it’s obviously important, as Jesus did it first thing after his baptism and intermittently throughout his ministry. He also told his followers that they would be expected to fast when the time comes. As well, fasting is a prerequisite for some types of exorcisms (for demons that can only be cast out by prayer and fasting) and as a prelude to sound decision-making: after Jesus’ resurrection, his followers in Jerusalem always entered into periods of fasting and prayer before making important decisions. This is because fasting is a known method for clearing your mind and getting closer to God.

That in itself – getting closer to God – is enough for me to give up food and drink for however long is required. But there are physical benefits to fasting as well, such as improved functioning of all the body’s systems, detoxification, increased energy, faster metabolism, healing from disease, slowing of the aging process, and an enhancement of mental acuity. Then there’s the money you’ll save on groceries and all the extra time you’ll have – instead of meal prepping, cooking, eating and washing dishes, you can spend more time with God.

A final word about the four-letter f-word – remember that Jesus told us we should fast the same way as we pray – privately (just between us and God) and without announcing it to the world or looking like we’re fasting. Don’t tell anyone but God; just do it quietly, and God will bless your efforts and show you his secrets, like he showed Jesus.

(Full disclosure: I ate two dates and drank a glass of spring water while writing this blog.)

By abornagainbeliever in Born-again Christian, Christian, Uncategorized on October 21, 2019.
← FEAR NOT! A Hallowe’en reminder UKULELE PEACE →