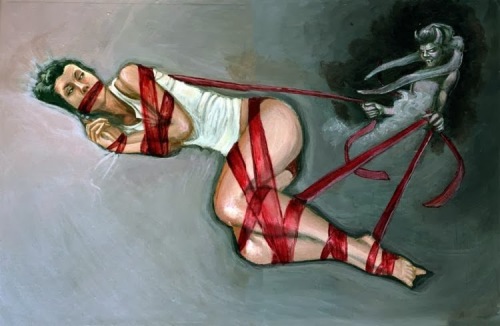 I came across a topic thread on an online forum today that was discussing sleep paralysis. Of course, most of the people were discussing it from the point of view of non-believers (attributing the paralysis to a chemical imbalance or nutrient deficiency), but a few commenters did mention that sleep paralysis is a demonic attack.

Throughout the middle ages, these forms of attacks were well-known and documented in great detail. The demons were even named as a certain type that preyed on humans as they slept. Then science, in its proud blindness, peered through an atheistic lens and attributed the attacks to the “unconscious” workings of the mind, somewhat like Ebenezer Scrooge attributed his ghostly encounters to a bit of undigested beef and cheese.

I’m not sure how many of you reading this blog post are actually born again, but I do know that if you are actually born again, you no longer suffer from demonic attacks in the form of sleep paralysis. This is one of the many protections that God gives his children: Demons can come near us, but they cannot touch us as long as God’s spirit remains with us.

Likewise, during our waking hours, we can be verbally attacked and physically threatened by demon-inspired people, but they can only physically touch us if God permits (think of how Jesus easily walked through the crowd of haters in Nazareth but then a few years later was arrested and crucified). When our time on Earth is nearing an end, the demonically-inspired will have power over our body but not over our soul. As long as we cling to God’s spirit and follow Jesus as closely as we can, the combined power of all the demons on Earth cannot touch our soul. That is another protection that God gives his children.

I have been born again for 17 years. Prior to being born again, I suffered chronic episodes of sleep paralysis. Being an atheist, I had no idea at the time what caused them, but they terrified me and I dreaded them. Sometimes I was afraid even to go to sleep, fearing that I would have one of my “spells”.

I wasn’t just an atheist; I was fascinated by all forms of witchcraft and devices like magic 8 balls and Ouija boards. I’d held and participated in séances since the age of 4, but I thought of them only as spooky games to play with my friends. I was drawn to darkness – horror comics, horror movies, horror novels – and so the darkness was drawn to me. I unwittingly invited it in.

When I was 17, I played the Wicked Witch of the West in my high school’s production of The Wizard of Oz. The girl who played Dorothy was born again, and at one point refused to go on the stage with me. As part of my costume, I’d painted 666 on my forehead and dyed my teeth and tongue green. She was terrified of the thing she saw working through me. Small children in the audience started screaming and howling when I came on the stage and had to be led out of the auditorium, crying. The adults thought it was funny and congratulated me on my talent to frighten people, but in hindsight I know it wasn’t me that was doing the frightening, and “Dorothy” and the small children knew it.

Those days are long behind me now, but reading forums like the one today about sleep paralysis reminded me of how naïve most people are about demonic manifestations. Their naiveté protects them to a certain extent (just as it once protected me, to a certain extent) but it still leaves them open and vulnerable to attacks. For me, being born again was like having the correct lens click into place so that everything in the world finally made sense, just like when you’re at the eye doctor’s looking through one of those lens gizmos, and the doctor finally clicks down the lens that makes all the letters on the eye chart perfectly clear.

The day I was born again, all I wanted to do (besides read the New Testament) was sing. I actually was born quite a lousy singer (enthusiastic, but very off-key due to inner-ear issues), but for a few weeks after I was born again, I sang like a bird – perfectly in key and soaring. One of the songs I loved to sing was “I Can See Clearly Now”. The clarity that comes with spiritual rebirth, when everything suddenly clicks into place and makes sense (however horrifying that sense may be), is unparalleled. No drug can give it to you; no belief system can teach it to you. The clarity of mind that comes with spiritual rebirth is the “clean slate” of demon exorcism, followed by seeing the world through God’s eyes for the first time.

It’s the demons oppressing us and confusing us that muddy our minds and make us see so unclearly.

I pray for every one of the people who were drawn to that forum on sleep paralysis today, just as strangers once prayed for me when I was an atheist. I know that spiritual blindness prevents people from accepting the truth of the source of the paralysis, but it’s still the job of believers to state the truth whenever and wherever they can, both in and out of season.

By abornagainbeliever in Born-again Christian, Christian, Uncategorized on July 10, 2016.
← THE KINGDOM HAS COME: PART ONE FEED THEM →