Home » Born-again Christian » NO, PLEASE – TELL ME WHAT YOU REALLY THINK…

NO, PLEASE – TELL ME WHAT YOU REALLY THINK… 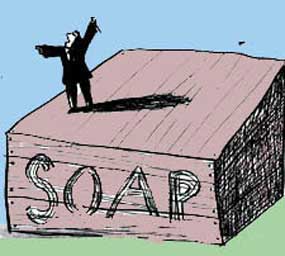 When all three branches of government have been co-opted like this, it ceases being an actual government and is simply a criminal enterprise.

We have no real government at this point. It is pure mafia, totally corrupt, and I believe our forefathers were clear on what needs to happen when things hit this stage.

Yes, that’s exactly what most if not all governments now are – criminal enterprises.

And the instant anyone genuinely (not as a paid gatekeeper, but genuinely) steps up to do anything about it and starts to gain traction, the surveillance system will have him or her pinpointed and then shut down by any means possible.

This is our world now. We have built it and earned it by our choices. It has not been imposed on us, but we have earned it, choice by choice. People get the leadership they deserve. Sadly, people’s choices in life now are so horrendously wrong that, collectively, we’ve earned mafia governments.

The only way we can get better leadership is if we first become better people, both on an individual and collective level. Frankly, I can’t see that happening. The trajectory is trending in the opposite direction and is gaining momentum fast.

Given the above, the only response is not as you suggest (violent revolution) but complete withdrawal from the body politic. The whole thing is now a filthy, festering sore that cannot be healed. Let those who make horrendous life choices have the corrupt government they’ve earned. And let those who are appalled by the corruption remove themselves lest they, too, become infected.

Whatever America was, it is no more and never will be again. Take a good long look around you at your “fellow Americans”, and then tell that I’m wrong. I wish I were wrong, but I’m not. I’m a realist, not an idealist. You cannot wish America back into greatness; you have to make ‘great’ choices to reclaim that forfeited ground, and the majority (and there’s the rub) THE MAJORITY now don’t even acknowledge that there are such things as “right” and “wrong” choices; they just stand there drooling, with their hands out.

America is a done deal. It was built by hard-working, God-fearing Americans, but it has been usurped by lazy, sleazy, dishonest cons with no self-respect let alone respect for others. This is not the government I’m describing here – this is the people.

You cannot make a birthday cake from mud and water. You need refined flour and milk and eggs and butter, but all America has now is mud and water.

Violent revolution will not change that fact.

The only response to the corruption of both the government and the people is to leave the body politic, not to try to change it. You cannot change it: it changes on its own according to the choices people make in their everyday lives. Even God himself can’t force people to make better choices.

And the only revolution that is needed is a spiritual one, so that the majority again become “people of good faith” and good character. Without such a self-willed genuine change in the populace – without a shift upward to “what can I do for my country” rather than a slide downward to “what can my country do for me” – the best we can hope for is Obama, Clinton, and Trump.

By abornagainbeliever in Born-again Christian, Christian, Former atheist, prayer, Uncategorized on October 24, 2016.
← BE GOD-FEARING AND WORK HARD THE ROLE OF PERSONALITY IN PREACHING THE WORD →