A SPECIAL NOTE FOR THOSE WHO STAND WITH JESUS-KILLERS 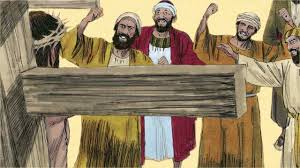 This is for you.

You know who you are.

You say you’re a Christian, but you openly support the Synagogue of Satan.

Can you really be that stupid?

Jesus was very clear about how to handle people who reject him as the Messiah, and it wasn’t to honor them as special friends.

No, it was quite the opposite.

And yet there you are, embracing members of Satan’s Synagogue as if they were the second coming of Jesus.

So I ask you again – CAN YOU REALLY BE THAT STUPID?

Anyone who rejects Jesus as the Christ is anti-Christ.

Let me repeat that, just in case you skipped over it the first time.

ANYONE WHO REJECTS JESUS AS THE CHRIST IS ANTI-CHRIST.

That includes the Synagogue of Satan. In fact, the Synagogue of Satan was Jesus’ #1 Enemy during his ministry years. It wasn’t the “heathens” he had trouble with; it was people from his own faith family who rejected, harassed and finally killed him; it was those who said they knew God, but showed by their words and actions that they clearly didn’t.

The spiritual descendents of those Jesus-killers are the very same people being lauded and supported by some very mixed-up Christians today.

It goes beyond head-shaking into the realm of the absurd.

So, since everyone gets the same chance as everyone else, why are you so-called Christians aligning yourselves with Jesus-killers?

You pray for your enemy, you don’t support their anti-Christ system. You don’t send them money to build a temple that will house Satan in the flesh. You don’t bow down before them and hang on their every word as if it were prophecy.

Give your bloody stupid head a shake! It may be that something will click into place and you’ll see the absurdity of supporting a system that actively works against God’s people.

I hope this is pissing you off. In fact, I hope you’re getting angry enough never to want to visit this website again, because frankly, people who are so screwed up that they actively support anti-Christ Jesus-killers are not welcome here.

Stop believing the lies of Satan.

Do you know who you are supporting when you align yourself with the Synagogue of Satan?

The people who did this:

29 And they that passed by railed on him, wagging their heads, and saying, Ah, thou that destroyest the temple, and buildest it in three days,

30 Save thyself, and come down from the cross.

31 Likewise also the chief priests mocking said among themselves with the scribes, He saved others; himself he cannot save.

32 Let Christ the King of Israel descend now from the cross, that we may see and believe. And they that were crucified with him reviled him.

The Jesus-killers that you send your donations to are the same kind of people who spat at and mocked Jesus in his agony. You don’t do the same to them, but you certainly don’t align yourself with them or support them in any way. YOU PRAY FOR THEM, but you give them a wide berth as long as they remain Jesus-killers.

So, go. Git. Scram. If you join forces with those who refuse to accept Jesus as the Christ, you’re not welcome here.

And you’ll not be welcome in Heaven, either.

By abornagainbeliever in Born-again Christian, Christian, Former atheist, Uncategorized on May 16, 2017.
← YOUR OWN PERSONAL NAZARETH SPIRITUAL BUTTERFLIES →