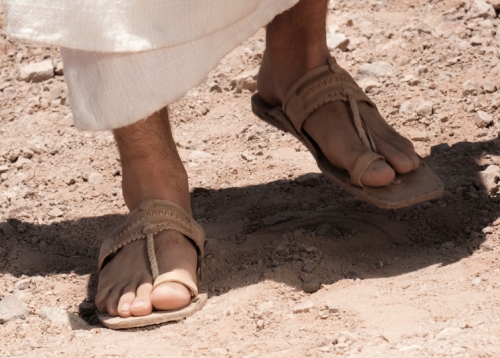 They’ve been wept over, prayed over, sat before, fallen before, bathed in tears, bathed in precious perfume, smothered in kisses, patted dry with hair, and hammered through with a crude nail. They are Jesus’ feet, the most famous feet in all of human history.

But even before his birth, scripture was extolling Jesus’ feet:

“How beautiful upon the mountains are the feet of him who bringeth good tidings!…”

“The Lord said unto my lord, Sit thou at my right hand until I make thine enemies a footstool.”

“I will put enmity between thee and the woman, and between they seed and her seed; it shall bruise they head; and thou shalt bruise his heel.”

During his ministry years, Jesus’ feet were his wheels. From town to village to city to Golgotha, Jesus’ sandaled feet carried him without fail. They must have been strong and hardy, those feet, and toughened from constant use. But I’m thinking that despite his feet’s relative celebrity, Jesus probably didn’t think much about them and rather just assumed they’d do the job they were created to do. In fact, despite all the hard labor his feet had put in over the years, Jesus pampered the feet of his followers on his final night on Earth instead of demanding that his own receive special treatment. This was a revolutionary act, as it was always the lesser who washed the feet of the greater. Jesus was clearly the greater, but there he was, getting down and dirty with the feet of his shocked disciples and advising them to do the same to others.

Even to this day, Jesus’ life-size crucified feet, stylized in marble or alabaster or silver or wood, are still being made a fuss over in Catholic churches, as people kiss them in reverence or touch them for good luck.

When we follow Jesus, we are following in his footsteps, tracing the path of his feet. Or like little children who “dance” with their mother by standing on her feet and being moved around the room with her movements, we can stand on Jesus’ feet and move as he moves. Mind you, he must have pretty big feet to fit all those people “dancing” with him, but he’s Jesus: He can do whatever he sets his mind to.

Thank God for Jesus’ feet! Without them, his story (and ours) would have been much different.

By abornagainbeliever in Born-again Christian, Christian, Uncategorized on December 28, 2019.
← WHO ARE THOSE SHEPHERDS? A QUESTION FOR YOU →